Church of the Birth of Our Lady Monastery of Minorites

History of the monastery 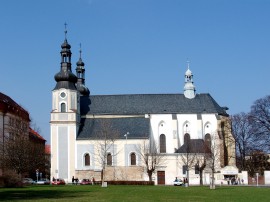 The history of the monastery and the church are inseparable connected with the history of Krnov town. It was common in medieval towns that there was a place reserved for monastery among the fortification, where monks and priests operated. The Minorites came to Krnov in the second half of the 13th century and established here a church and monastery. The Church had a great influence on contemporary society at that time. The Minorites spread not only belief, but also an education. The church was restaured and present visitors may admire frescoes decorations made by a painter Josef Stern.

In 1523, Krnov and Hlubčice principality were bought for  58 900 Hungarian Guldens by margrave Jiři Hohenzollern of Ansbach. A new belief came with a new ruler. A strong supporter of Luther doctrine forced catholic Order of the German knights together with Franciscan Minorites out of the principality. The church turned into a grain warehouse. The monastery turned into hospital and a margrave mint.  In Krnov, more than 200 types of coins and medals, very rare now,  were  minted here.  The prince gave the chapel of Minorite church to a court cabinetmaker to establish his own house. He also occupied a large monastig garden. Later, a tale of a cabinetmaker originated.

The Minorites came back to Krnov probably in 1650. To commemorate this event, they got a permission to build up a wooden chapel at Cvilín peak. Later between 1722-1728 they also built up a baroque Marian pilgrimage church.

Krnov was affected by many fires. The largest one in the town history was caused by Prussian army on April 1 1779. Almost whole town was destroyed. The fire destroyed some of the precious monuments including a gothic church, the Minorites monastery, a renaissance town hall and a princely castle.  Most of monuments were rebuilt. The Minorites church got a new façade, preserved up to now.  The monastic library consisted of 8 200 volumes.  It also included 11 rare incunabulas and works coming from the period around 1500. These books are saved in depository of Krnov town museum.

In 1950 the monastery was closed down. It was renewed again in 1989. This is the reason why we can again meet Minorites in the town. The oldest preserved part is the chapel in the southern side. Originally, the monastery was situated at this side,  however it was built in the northern part of the church later.  This probably happened after the fire, when the church burnt down.

How to recognize a Minorite?

The Minorites or the Order of Friars Minor, is a begging monk Order established by St. Frantisek of Assisi. Typical clothes for the Order members includes a brown cowl, fixed with a white rope with three knots in waist area. The knots symbolize and remind the Minorites three Order rules: poverty, discipline and purity.

Curiosity about the monastery

The building served as The Morava hotel between 60´s and 90´s of the 20th century, characterized with inconvenient exterior and interior modifications. In 2000, a provincial chapterhouse was held here and after that, a communal life of Minorites was renewed. A part of the monastery is used as an accommodation facility “Betanie”.  The Minorites Order symbol is placed just above the monastery front door – two crossed arms with a cross in the center.

Based on this tale, all paintings in Marian church chapel were removed and burnt after monks´ expulsion.  After drinking all night long, the a cabinetmaker slept by the altar. The next morning, a grandam from Chářová came for a mass  and found the cabinetmaker just next to  a desecrated painting.  The grandam cussed him with a curse of going like a lifelike corps, until the Marian painting is consecrated again.  že musí chodit tak dlouho jak živoucí mrtvola, A cursed cabinetmaker settled down in a cave just under Cvilín peak.  He picked up medicinal herbs and made ointments to heal people and animals. Nobody could easily see him, he just left medicaments, having miraculous effects, on the same place.  People called him “a devilish cabinetmaker”.  After the Minorites came back to Krnov, the Superior visited the cabinetmaker and after his confession, he was accepted back to become the Church member.  The cabinetmaker died, as there was a wooden chapel with a consecrated painting of Mary Virgin at the highest point of Cvilín peak.