The holy spirit church with hospital

The present of the church

At present time, this reconstructed building serves as a concert hall with a beautiful organ built in Krnov. The building is, after a gothic church and a baroque hospital reconstructions, a real pride of Krnov. Various concerts are held here. The premises are also used for wedding ceremonies, auctions, discussions and  elementary and secondary schools´ graduation ceremonies. Among the most traditional events belong concerts of Elementary art school Krnov, Secondary art and organ school, The ArsVoce choir,  a cymbalo music of Krnov and  the Musical festival of secondary pedagogical schools.

History of the church 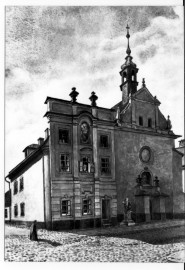 The Holy spirit church is one of the oldest preserved buildings in Krnov. It originated in the 80´s of the 13th century, when the town dealt with the necessity of building up a hospital for ill, poor and starving people.  Therefore the German Order of knights was called up to sort this matter out. The original hospital building was probably made of wood and served as a harbour for 12 mentally  and physically healthy men and women, who were called “the hospital people”.  They were given the accommodation, food, clothes, health care and some financial benefits  for free. On the other hand, they were obliged to pray for their benefactors for three times a day in the church.  The ceiling was originally made of wooden beams, later in the 15th century is was replaced by ribbed vaulting and decorated at the same time. The hospital was run by the Church and therefore monks and their helpmates looked after ill people for centuries.  Churches were always built up nearby hospitals, because the Church´s mission was to take care of not only a body, but also the soul.  Also ill people could visit churches and prayed for their recovery.

In the period of the Church´s supporters persecution, the hospital was closed and ill patients were moved to the Minorites monastery. An empty hospital building served as granary and a pub of a poor reputation (16th century).

In the 17th century the church was reconstructed and got a new façade, a shield and two baroque widnows in the nave. A pinnacle was put onto the roof. The most valuable items in the church are the originals of mural coloured frescoes of an unknown author from the 1st half of the 15th century. They presents 27 pictures showing acts from the Old and the New Testament ordered in a row. Regarding  range, age and the way of processing, this complex is very unique in Nothern Moravia and Silesia. 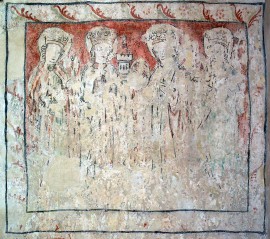 Curiosities of the church and the hospital

At the place of contemporary crossroads there used to be the one out of three town gates – the Hlubčická gate. The gate was built in a rennaisance style in the first halft of the 16th century, during the reign of margrave Jiří Hohenzolern.  Groundfloor premises were used as a jail for Krnov citizens who did not attend worships properly.  on the groundfloor there were also shoe shops. Due to fires, the statics of the house was disrupted. The building dilapidated and there was a risk of its downfall. Therefore it was completely destroyed in 1860. The building was said to be the most beautiful one in Krnov.  A new tradition was established in the hospital. In Easter time and on Good Friday the poor people from Krnov principality were given food, drinks and some money for free.

A bell tower, which you can see in the garden, was built in 1988.  Its cupola comes from a destroyed chapel in Guntramovice. The bell was made by an Olomouc bellmaker in 1861.

The sculpture group in front of the building has got the name “Joy of life” and it was designed by a Prague sculptor Olbram Zoubek.