Present of the castle

At present time, there are cafés with an outdoor sitting and a disco club in the courtyard.

History of the castle

The castle in Krnov was bulit by the Premyslids and a used material was mainly timber.  During the reign of Jiří Hohenzollern the castle was completely demolished and built up again between 1531-1535. This time, the castle was made of stone.

Rich local people had to support financially the building up the castle. The castle was designed by a builder Hanuš Ennych of Ennych. The castle area was expanding with building up mainly administrative buildings.  The castle lacks regularity and squarness. The original shape of the castle, which we do not know now, was so masterfully designed and the castle was said: It is like a bull head ready to horn an opponent.  An aesthetic appearance was a second-rate. Its prior function was to face an outer enemy, only which was achieved by the system of fortifications.  Despite looking modest and simple, the furnishings was worthy to the king.  A princely castle represented a renowned seat in Silesia and Moravia. Farm buildings, food warehouses, servants houses, horse stables etc also belonged to the castle area. The castle buildings and mural walls close an irregularly shaped courtyard, where the knights´ tournaments took place. The Hohenzollerns resided here until 1622, then the castle was confiscated and gained by the Lichtensteins. In 1779 all the furnishings burnt down in the fire. After that the castle was never used for its purpose again.

An arcade corridor with remarkable Renaissance sgrafittos with a relief figural decoration makes an adornment of the courtyard. Women bodies symbolize: music, art and singing. Sgrafittos were discovered by accident in 1888 and then they were restaured. They are definitely worth seeing. 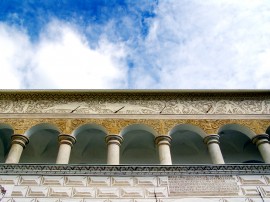 Last modifications were performed after 1945, when the castle was confiscated and modified for administrative purpose by a company “Lesní závod” Krnov. At present time the castle is used by  the national company “Lesy” for commercial purpose. The courtyard is freely accessible. 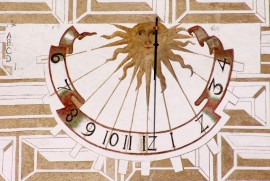