The present of the shooting house 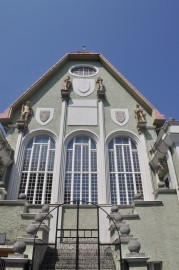 Méďa leisure time centre enables children to spend their leisure time in hobby clubs or with various events which are held here such as garden festivals or puppet shows.

History of the shooting house 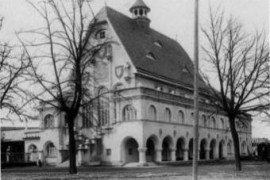 In Krnov, shooting sport used to have a very long tradition. The beginnings are dated back to 1425, when it was run outside the town. This shooting house was the third in a row. It was built between  1907 and 1908, designed by Leopold Bauer, a native of Krnov. It was built in honor of the 60th anniversary of František Josef ´s I. reign. The building is a prentious house with a sloping roof, wih an arcade on the northern side and a long balcony. The building is also rich in sculptural and stucco decorations. Life-sized statues of medieval shooters wearing period clothes are placed in the shield.

There are many rooms inside. On the first floor, there is a large hall and on the ground floor there is a small one, which used to be a shooting station suitable for shooting the targets placed in the garden, protected with walls and ramparts.  The shooting club became the most popular corporation of local bourgeoisie. This corporation existed already during the first republic. The building not only served the shooting club, but also prestigiuous social events took place here.

After World War II.  the house was confiscated. After establishing a pioneer corporation in April 1949 “The House of pioneers and youth” was established.  During its 50-year old history the house have had many managing authorities, legal forms and directors.

In 1970´s the building underwent quite devaluing reconstruction. Next reconstructions were done in 1997, when the town was seriously hit by floods.

The last dramatic change came after 1989, when the existing name was changed to “Dům dětí a mládeže” (DDM).  In 1997 another word was added to the name – “Méďa” and since that time it is closely linked with DDM. The scope of DDM is not only focused on leisure activities of children and youth but also activities of adults. At present time, the managing authority is Krnov town council and the official name is “Méďa leisure time centre” (SVČ Méďa).

Nowadays Krnov can also be proud of its shooters. The shooting club has brought up many Czech champions and national team members in various shooting competitions.