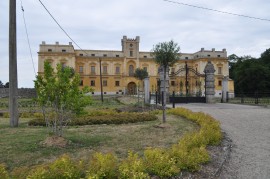 In Slezské Rudoltice there is a wine bar with a disco club, three pubs and three groceries. In July 2013 a new accommodation facility with an equipped kitchen with capacity 25 beds was opened. Here guest will appreciate a daylong catering, sauna and a bike rental. Swimming and fishing is also available at local pond in Bohušov  (8 km distant) or in the open-air swimming pool in Město Albrechtice or Osoblaha (10 km distant). Polish border crossing is 6 km distant ( towns Prudnik 15 km, Opole 55 km). A narrow gauge railway with a historical steam engine leads through the village. 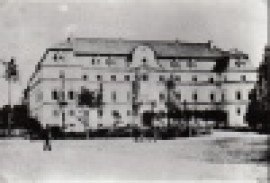 A smaller Renaissance castle was built by Fulsteins between 1548 and 1565 in the bottom part of the village, at the place of a medieval fort. Fulsteins died out in 1570 and the castle was taken over by Sedlničtí of Choltice. Unfortunatelly, due to their taking part in anti-Habsburg Estate resistance, their property was confiscated. Maxmilian of Dietrischstein became a new owner of the castle. He did not hold the castle for long time and in 1630 he sold it for 15,000 guldens to Jiří, a single lord of Hodice.

An important person of Hodice family was a Count Albert born in 1706. He studied in Vienna and travelled Germany, Switzerland, France, England and Spain. He especially admired Italy, charmed with local artistic monuments. He inherited three mansions after his father  – Rudoltice, Dolní Povelice and Fulštejn. He also profited from his wedding so that he decided to reconstruct and modify the mansion extensively.

The Rudoltice castle, rebuilt in a Baroque style, became one of the most important cultural centers in Silesia. The castle also had its own theatre and a music band. Karel Ditters and Karel Hanke, famous composers, were members of the band for a temporary period. Among important guest belonged a Prussian king Bedřich, the winner of Silesian wars over Maria Theresa and especially a French litterateur and philosopher Francois Marie Aroust, known under a pen name Voltaire, who critisized the power of Freneh monarchy and church. He was forced to leave Paris and he was persecuted for spreading freedom of speech.

After Hodic´s death in 1778, a baron Friedenthal became an administrator of the mansion. He let quickly sell  all the stuff from the castle chaple, an art furniture and valuables.

An art furniture, clocks, paintings and thousands objects of art – they all were sold or cleared out. The castle lost its two towers and a coppery roof, Chinese gardens, arcade passages, groves and many others.  Only a little reminds the Count who wanted to make a better spiritual life, education and a social life in a small village.

Since 1779, the castle was owned by a burgher Čejka of Badenfeld, whose blazon is pictured on the castle wine bar building.  The next owners were a factory owner Steuer from Krnov and Heřman Brücker from Červená Voda, who did not take care of the castle very much. The last owner was a horse-trader Franz Andres until 1942.

During World War II., the castle was, among others, a seat of Goebbels´ ministry of propaganda from Berlin and the information were forwarded directly to Hitler´s headquarters. Later, training of armed Hitler´s youth (Hitlerjugend)  took place here.

Exhibitions and expositions at the castle

At present time there are some permanent exhibitions such as old radio receivers, tools and instruments of a daily use of our ancestors and a revival of a traditional craft -  a handmade lace.

The castle is also an exhibiting place of a various kinds of art such as students´ photograpy exhibition, handmade craft exhibition or a paintings exhibition from neighbouring castles. 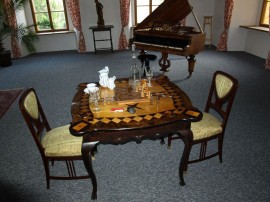 Curiosity of the castle

The castle is a seat of a corporation “Severští pánové”. The members are looking for items and furniture suitable for rooms decoration.

Apartments are situated at the place of a former keeper´s flat. Grant money covered reconstruction costs as well as furnishings.

Apartments are fully equipped with LCD, a washing machine, a kitchenette with a cooker, and a bathroom. To learn more about apartments visit  http://www.slezskerudoltice.cz/zamecke-apartmany/.