The villa of Hermann Larisch

Present of the villa

At present time, the villa is a property of a regional archive of Opava.

Hermann Larisch (1885 – 1975) was a younger son of the company owner Rudolf Larisch.  The villa, originally belonging to his uncle, became Hermann´s property in 1910. The villa was built up by a builder Ernst Latzel in 1885.   Hermann Larisch had the villa rebuilt and the project leader was Leopold Bauer, a friend of Larisch family. 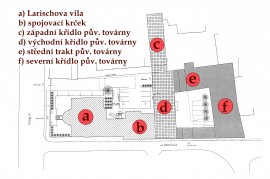 Leopold Bauer added into the project the rear wing including kitchen, staircase and an accounting office, which was on the first floor.  In Bauer´s project, the original two-arm staircase was replaced by the spindle-shaped one.  The spiral winding the centering column in the hall was made of and oak wood, while the railings was made of a forged iron.

Another dominant feature of the hall was a fireplace made of ecru bricks and covered with acanth decorations. 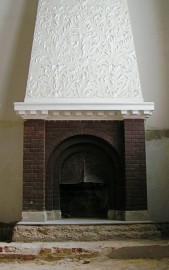 The hall and dining room were connected with four-wing glass door. In the dining room there was an oak table with four chairs and two carved sideboards. The dining room walls were partly covered with cloth wallpapers. The ceiling was covered with stucco plaster and rosettes.  Furnishings in the bedroom and lounge, which were on the first floor, was made of a cherry wood.

The bathroom was tiled with white marble. During the reconstruction, a fountain with decorations by a sculptor Josef Obeth was also built in the villa.  The part of the first floor was used as an accounting office.  In  1926,  Leopold Bauer was asked again by the villa owner to design a bedroom at the place of an empty room. Thus Bauer divided the room space with a partition, behind which he placed a toilet, a bathroom and a dressing room. The fireplace was also a part of the room. The furnishings, made of a walnut wood, had Bauer manufactured by a Prague company Gerstl. 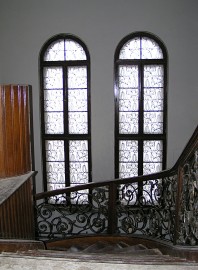 After war Hermann left the country for Bayern, later Austria. The villa was confiscated and used as offices of Karnola company. At present time, the villa is a property of a regional archive and it is also a real cultural monument.