The villa of Rudolf Larisch

The Larisch company was the oldes and largest textile plant in Krnov. 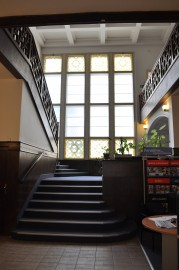 Rudolf Larisch (1850 – 1912)  was the youngest son of the company founder. In 1871 he and his two brothers took over the company and later in 1899 he became the only company owner. Rudolf´s brothers had their houses designed by a local builder Enst Latzel, while Rudolf entrusted the design to two architects, Hans Mikschovand  Julian Niedzielski, from Vienna.  Other Larisch family members used to inhabit modest houses in a classicistic style, however Rudolf´s villa is formed with risalits and shields of  various shapes and an asymetrically situated  balcony. 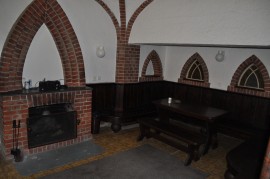 In  1902 Leopold Bauer designed an exclusive furniture for a male room. The interiors were of a square angular shape.

Rudolf Larisch junior (1884 – 1937), who was the third generation of a manufacturing family representative and a heir of the plant at the same person, studied an elementary school in Krnov, a business college in Hamburg and a textile school in Belgium.  During his father´s life he was to establish  a living on the first floor of the villa. In 1911 Leopold Bauer designed a reception room, bedroom, dining roon and yet a bookcase. 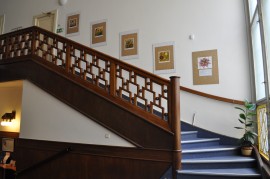 In 1929 Bauer was call for the villa transformation. The rear wing was enlarged and extended and a transformation of the original hall and three-ply, right angled staircase, a new hall arose.  The axis of the hall is the curved main staircase, where the corner with a fireplace was designed by the architect. The window is filled with a stained glass of  geometrical patterns. The ceiling is made of ferroconcrete beams. Okno vyplňuje vitraj s geometrickými obrazci, kazetový strop byl z železobetonových nosníků. In the basement Bauer designed a vaulted area with a fireplace. 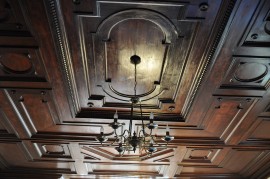