The villa of Steuer and Cerhak

The villa in Zacpalova Street belonged to a textile company owner Heinrich Steuer.

The villa was designed in 1931 by a Vienna architect Franz Wilfert in a late Baroque style. Contruction was realized by a well-know local company  Koch a Kindermann.  Steuer villa is one of few monuments in Krnov, which is almost untouched with reconstructions and modifications.

In post-war period  the building was used as an infant school. Later, it was a seat of a tax office until the half of the 20th century. After that, a town cultural and information center and a town museum were moved into the villa. At present time,  the villa does not serve any purpose.

Exterior of the villa

It is a two-storey villa with a garden and a fencing.  The villa has got a mansard roof cover with a grey eternit. It is built on a stone socle with cellar windows.

Main frontage is devided with risalit of a triangle shield into two parts with five window axis. The entrance is made of an arc  fringed on both sides with columns supporting the cornice with a small roof, stressing the centre of risalit.

A rear wing of the villa is opened to the garden. There is risalit on both sides with a terrace, having a wide staircase between them. An arcuate, glassed-in door leads to the terrace. The staircase leading to the garden has got  a low stone railings with ornamental balls on the pillars.

Interior of the villa 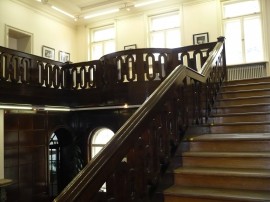 In the interior of the building, a spacy hall over two storeys is preserved. The facing of the hall and a massive staircase is made of stained lacquered wood. In the hall, also a richly decorated fireplace with two pillars and a cornice are preserved.

Door on the ground floor leads into two rooms, which were used for exhibiting purposes not long ago. The first room with a bay window used to be a salon, a wooden facing is still preserved on walls. A rear room was used as a male room. On the ground floor, there was a kitchen, toilets and a pantry. 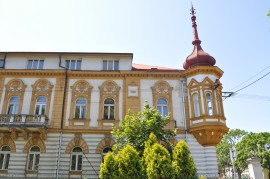