Facts about the lookout

When arriving to Krnov from Opava direction, a cylindrical stone lookout welcomes you. The lookout is situated at Cvilín hill above Krnov (436 m above sea level). It is 26 m high witha wooden staircase inside. The very first opening of the lookout is dated back to June 11 1903.

History of the lookout

The lookout was built according to the project of an architect Ernst Latzel thank to  Krnov section of Moravia-Silesian mountain corporation between 1901-1903.  During the opening ceremony held on June 11 1903 it was given a name “Liechtenstein´s lookout”, in honor of a rich maecenas, without whose donation it would not be possible to build up the lookout. At the end of World War II it served as a watchtower of German troops, which fortified at Cvilín hill. The lookout lost its unique torret while being reconstructed after war. 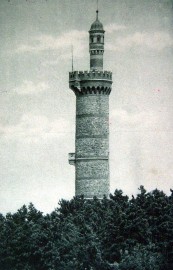 In the 60´s the lookout suffered the fate like many other similar buildings, when TV transmitters were placed at its top. These were removed just not long time ago, after its complete reconstruction. If you would like to enjoy a beautiful view to the surroundings, you have to climb 144 steps to the top of the lookout.

Eastwardsduring a high visibility you can see the highest peaks of Moravskoslezské Beskydy  – Radhošť, Smrk and Lysá hora. Westwards you can see the peaks of Hrubý Jeseník with its highest peak Praděd, also Vysoká Hole, Petrovy kameny and Biskupská kupa. Of course the whole Krnov will seem to be like in your hand. On your left side, there is a pond “Balaton”, also called “Petrův rybník”.

You can buy a tourist stamp just at the lookout. During winter months, the stamp is available in tourist information office in Krnov. You can also buy here a wide range of other souvenirs.