The Vok tower is situated in the center of Prudnik, at Zamkowe square. 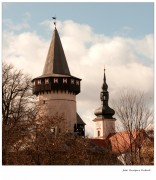 The tower is considered to be the oldest private castle tower in whole Poland. It is accessible all year long. The admission is under administration of Prudnicko
region Museum. To learn more, visit http://www.muzeumprudnik.pl. 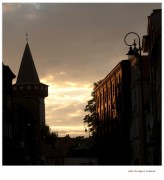 The Vok tower is a remain of the castle from the 13th century. It is the oldest monument in Prudnik and one the oldest towers in whole Poland.  The final decision to build up a fortress was
made by Vok of Rozenberg in 1255 and it is named after him till present. In the past, this building of a cylindrical shape played a key role of the last
protection. Its thick walls and the entrance in the height of 12,5 m made this tower impenetrable. In 1806 a fire broke out in the castle. The tower was the
only building that preserved. Shortly after the fire, the tower became the only visible monument of the defensive fortress.

In 2009 the Vok tower was completely reconstructed with a financial support by Prudnik town. Nowadays it serves as a lookout tower. It is 41 m high and the roof is
covered with a shingle. Thanks to the complete wainscoted ceiling, visitors can admire beautiful panaromatic views to the town and Opavian Mountains.