Seat of the council authorities. Town situated on the right bank of the river Osoblaha. Town was given the urban rights in 1275 on the strenght of the privilege of the duke Vladimír Opolski from the house of Piasts.

Information about the observatory

Nearby the Franciscan monastery there is a reconcstructed building, which is suitable for cultural and educational events and also tourism services. 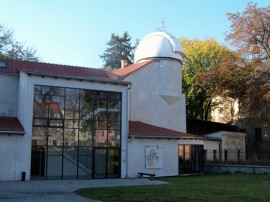 Concerning reconstruction, the building was divided into three parts:

On the ground floor there are two halls for social events of partner towns, cultural or educations meetings.

On the first floor there is a permanent exposition of town and Franciscan monastery history.

On the second floor there is an observatory, with a rotary copula and rotary telescope for space objects observing.  The observatory is equipped with necessary devices and programmes to enable on-line access via internet for inhabitants of Czech - Polish bordering regions.

The observatory also has a second pair of binoculars on a daily observations of the Sun.