From the top you can observe peaks of Jeseníky Mountains, Beskydy Mountains, Low Tatras and also Poland. 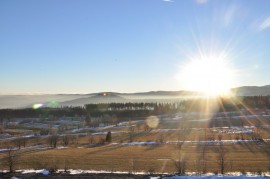 The tower is 20 m high. Curiosity is that the tower was built according to the design of the tower (nowadays no longer existing)standing at the highest peak of Smrk until 1946.  In sto pod Smrkem, a corporation for the lookout at Smrk revival was established. This intention, unfortunatelly,  has never been realized. Its perfect replica ovice, at the place with a rocky bedrock. This is the reason why it was named "Na Skalce". 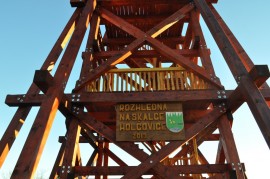 The lookout construction was co-financed with SZIF, the grant amounted CZK 750,000. The building approval was held on October 29 2013 and it was built by Vašek Moravčík company. For the future, a new natural trail is intended to be built around the lookout.  In a close surroundings you can also visit an African museum and nearby Zoo park. Get to this new lookout and enjoy a beuatiful view to the countryside.